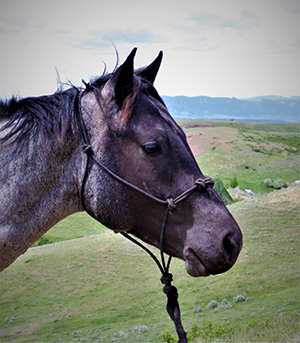 Let us introduce you to MT Salty Blue.  Salty is a 3 year old, 15 hand Quarter Horse Stallion. He is very well built with correct conformation. He has a nice full hip and a beautiful head. Salty is very easy to handle and be around and is a gentleman in every way. He is very trainable, athletic and willing.

Salty is homozygous roan and black which means that no matter what color your mare is, they are guaranteed to be blue or bay roan. We will have our first colt crop out of Salty this spring and are very excited.

Salty is a true blue roan stud with black head and legs. He is double bred Blue Valentine who himself sired many solid arena and ranch horses. 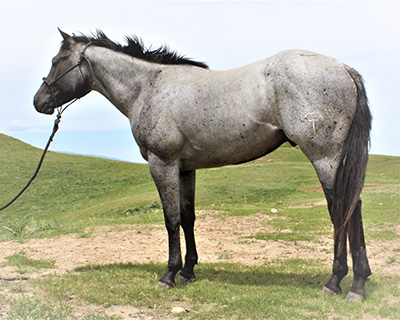 Blue Valentine was foaled in Benson AZ, on Kenny Gunter’s Ranch. Dell Haverty bought Blue Valentine. Haverty’s wife was a daughter of Buster Hayes of Thermopolis, Wyoming. Haverty took Blue Valentine up to Wyoming to the Hayes Brothers ranch & sold them 1/2 interest in him. During the Hayes/Haverty partnership, Blue would be hauled south in the late summer for Dell to use at the fall & winter rodeos in the southwest & for the early breeding season in Arizona. He would then be hauled back up to the Hayes Ranch at Thermopolis, Wyoming for the late spring breeding season & to rope on at Cheyenne Frontier Days & other Wyoming rodeos in the summer. Blue was used for roping, ranch work & steer tripping, when the calves weighed 800-900lbs. In 1968 Haverty’s daughter barrel raced on Blue (he had never been run on barrels) took 3rd at the annual Casper, Wyoming pro rodeo, an all-girl competition. Over the years, many members of the Haverty, Merritt, & Hayes families took their turn at competing on Blue Valentine, in rodeo events. In August 1980 he died, at 24, from a ruptured intestine due to colic. The same month Buster Hayes was killed in an accident & none of the heirs were financially able to take over the ranch. It was sold & the Hayes Brothers broodmare band was dispersed. In 1983, Hyde Merritt was killed in an accident & his family also had to sell his ranches & most of the horses he had spent his lifetime breeding. Hyde’s wife, & their son Chip, managed to keep some mares & two stallions. Chip has spent years rebuilding a Blue Valentine herd & legacy. Vince Hayes was also able to keep a few horses, including Leo Hancock Hayes, one of the last sons foaled the year Blue Valentine died. Leo Hancock Hayes is now owned by the Brookings in Texas. Blue Valentine horses are known for their gentle disposition, bone frame, good feet & minds. There are now only 2 remaining sons of Blue Valentine, Leo Hancock Hayes & Blues King Fisher. Blue was 25% Joe Hancock breeding.